The Vast History of Emmetsburg

Iowa became a state in 1846 and Palo Alto County was established in January of 1851. In the mid 1800s, migration from Ireland to America was at its peak. After arriving in New York, many Irishmen worked their way west. In 1856, a group of Irish immigrant families settled near the geographic center of Palo Alto County, attracted to the fertile land of Northwest Iowa. They established a frontier Irish colony in Palo Alto County on the banks of the Des Moines River near the present site of Emmetsburg. The families were: Nolan, Neary, Mahan, Laughlin, Downey, Sylvester, Jackman, Hickey and Crowley. From these families blossomed the distinctive Irish flavor of the area. The first white child born in the county blessed the Hickey cabin in October, 1856. In the winter of 1855-56, a band of Sioux, with 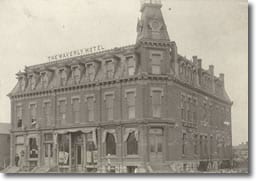 Old Sleepy-Eye as its chief, also camped about 50 rods from the Crowley log cabin along the banks of the Des Moines River. A winter count for 1856-57 showed nearly a dozen souls at West Bend, 42 at the Irish Colony (Emmetsburg), 14 Indians nearby, and 3 professional trappers. In 1858, attempts were made by Hollihan, Cahill, and Cavenaugh, who came from Fort Dodge, to stake out a town on the west bank of Medium Lake at the southern extremity. Hollihan wanted the town named after Robert Emmet, the Irish patriot who in 1803 was executed by the English government in Ireland’s fight for independence. They agreed on the name—Emmetsburg. Today, a statue of Robert Emmet, one of Ireland’s most venerated heroes, stands in the Palo Alto County Court House square. That original town of Emmetsburg only existed for a short time in 1856. Then January 3, 1859, a county seat was established, called Paoli. This, too, lasted only a very short time and was abandoned. The first census in the county, 1860, enumerates 133 inhabitants and lists no Indians. The county began to fill up with citizens after the Civil War. Some were natives from the states east of the Mississippi, but many came as immigrants from Europe; Norwegians, Poles, Danes, and Germans came to farm the rich land. More Irish and Scotch-Irish joined those who had arrived in 1856; others would follow.

Around 1865, Martin Coonan hauled some of the abandoned Paoli courthouse bricks to the area of “Old Town,” the nucleus of the original Irish Colony, and built a two story house, known as the “tavern.” Soon other cabins and businesses were built in “Old Town.” Coonan secured the post office, and erected a sign lettered “Emmetsburg” with a hand pointing to his house. The census of 1870 lists 1338 people in the county. Prairie fires and grasshoppers were the plagues of the early farmers in this area. 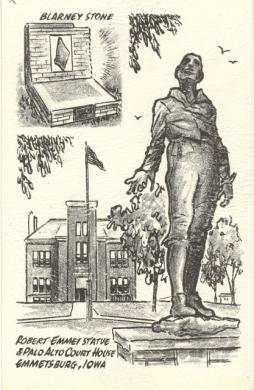 In June of 1874, representatives of the railroad company met with businessmen of the Old Town, proposing a mass move. Having platted the new town a short distance away, the railroad was willing to give businessmen choice lots if they would move. On September 2, 1874, the first business was moved. By December the current town of Emmetsburg had come into existence, to become the county seat in 1875. “Old Town” faded away. The towns of Ayrshire, Curlew, Cylinder, Graettinger, Mallard, Osgood, Rodman, Ruthven, and West Bend sprung up along the new railroads. In 1880, the year the brick courthouse was built, there were 4053 souls living in Palo Alto County. Among them, a lad of 2 years, Dwight McCarty, would be asked to write a comprehensive history of the county in 1906.

Through the years that followed, the complement of 16 townships was established, and the county continued to grow. The rich farmlands and prospering towns made Palo Alto County a flourishing community and held great promise for the future of its citizens. 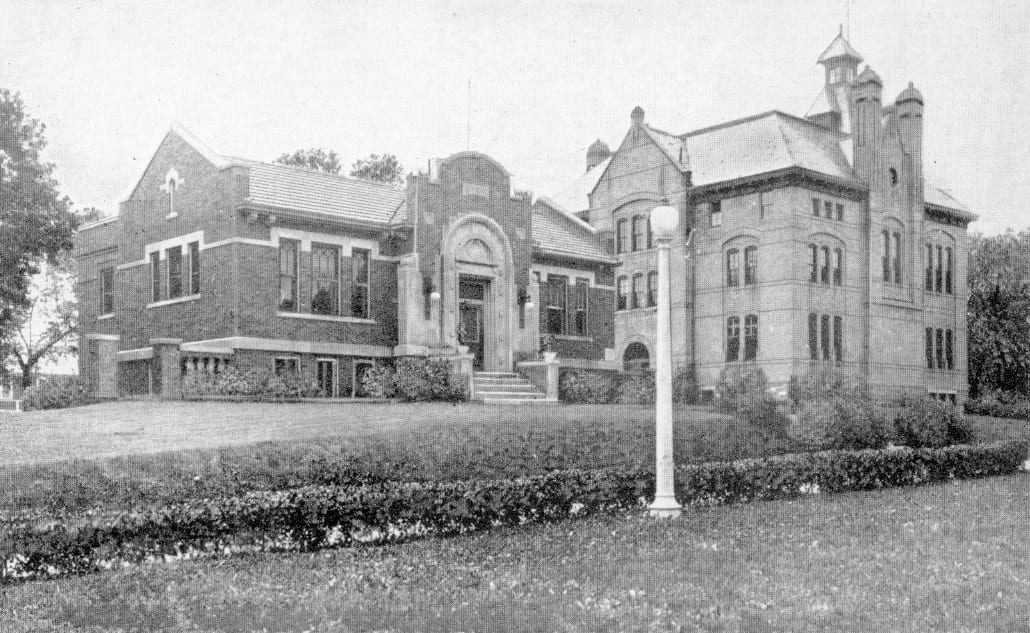 Because of the large number of Irish immigrants, the culture and customs of the Emerald Isle were preserved in the area, even though there were large numbers of Germans and others. One such custom was the observance of St. Patrick’s Day. The festivities have grown from a small group of men marching down Main Street with the Coat of Arms and green derbies to a gala three-day celebration that includes a variety of activities to please people of all ages.

The link to Ireland was further reinforced in 1962. Negotiations between the Emmetsburg Mayor and the Lord Mayor of Dublin, Ireland, resulted in a joint proclamation officially declaring the two as “Sister Cities.” Through this declaration, they agreed to join together in the rejoicing and celebration of St. Patrick’s Day.

Much of this history was taken from Dwight McCarty’s book and the Financial Report of Palo Alto County, Official Directory, Fiscal Year 93-94. 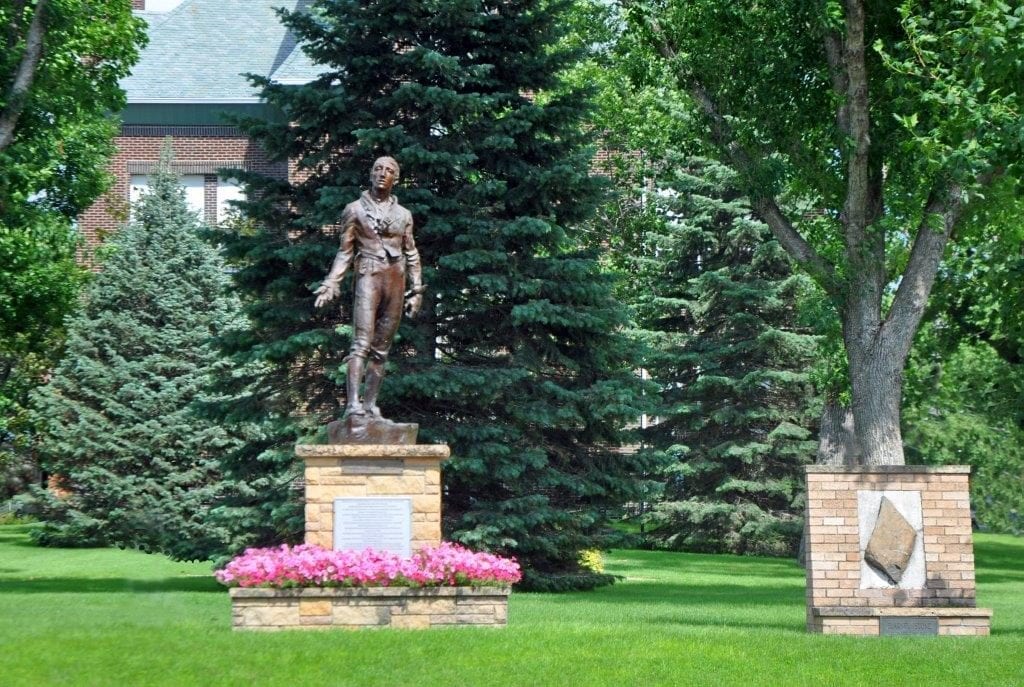